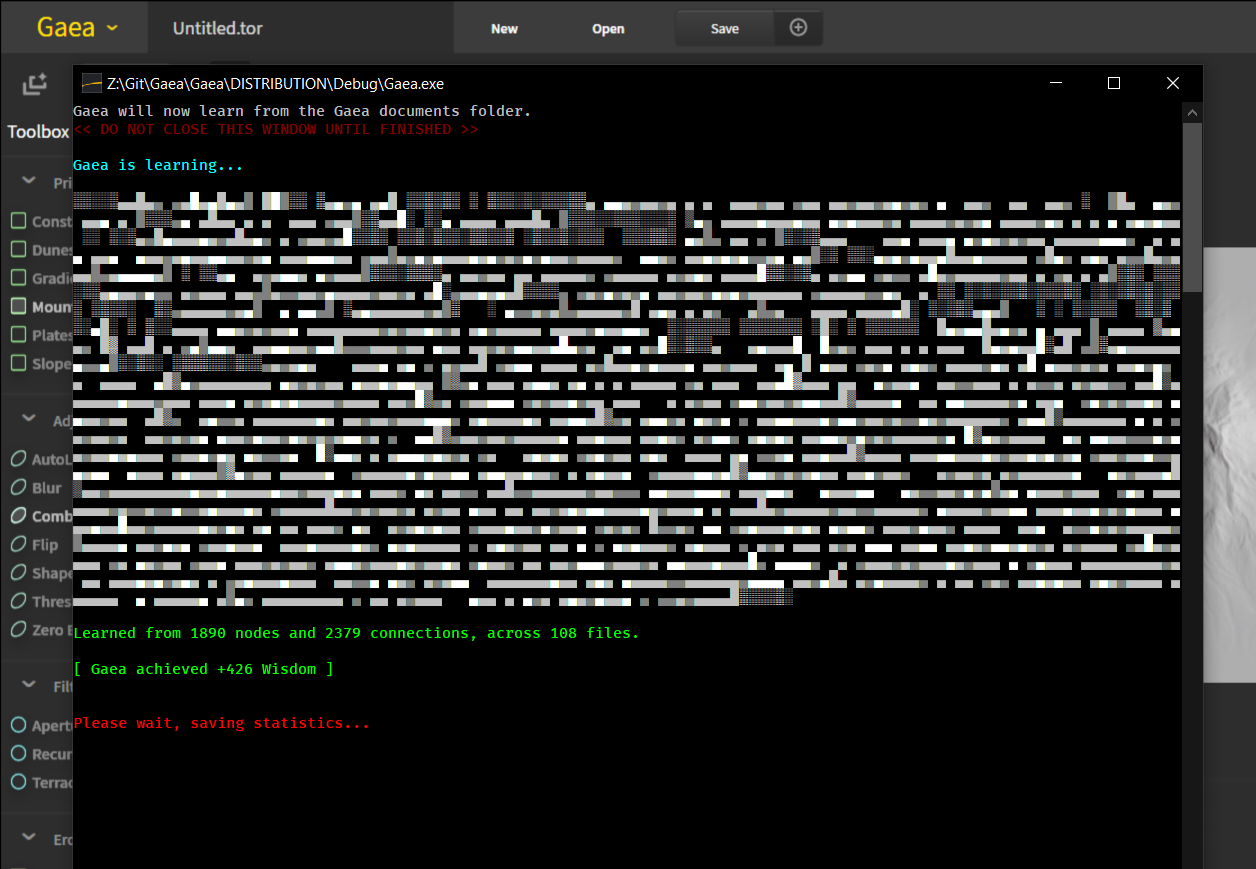 Gaea's Predictive Services are small, helpful utilities that learn from how you use nodes and try to come up with helpful like spelling suggestions on your phone - except, this is done non-aggressively and very privately on your computer (not on some far away server).

First, you need to train Gaea. You can do so by opening the new Toolbox menu in the top right corner of the Toolbox and selecting "Learn from Gaea Docs folder". It will then go through any files in your Gaea docs folder that were created in the last 3 months and learn from it.

Once trained, Gaea will start suggesting nodes. If you drag out a connection from a port, and drop it in any empty space on the graph, the create menu will pop up. Beneath the normal list of nodes, Gaea will suggest nodes based on your previous usage patterns. 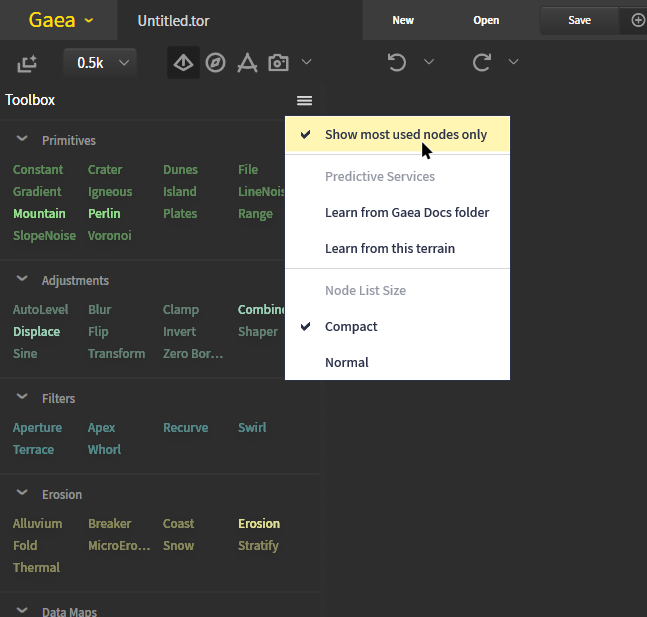 Another benefit of the Predictive Services is that you can open the Toolbox menu and turn on "Show most used nodes only". This will hide all the nodes that you don't regularly use, saving you precious workspace pixels. This choice is not persisted, and is for the session only, and can be toggled as frequently as you like.

The suggested nodes and TAB search results are not affected.

The new Compact Toolbox mode also provides extra space so you can see more nodes, even on smaller screens.

Get name from parent

Here's a little UX improvement we cooked up. Sometimes you have tons of outputs and you spend time naming them. Then you need to add auxiliary outputs for those such as normals or data maps, and it can become a giant chore to name them all. 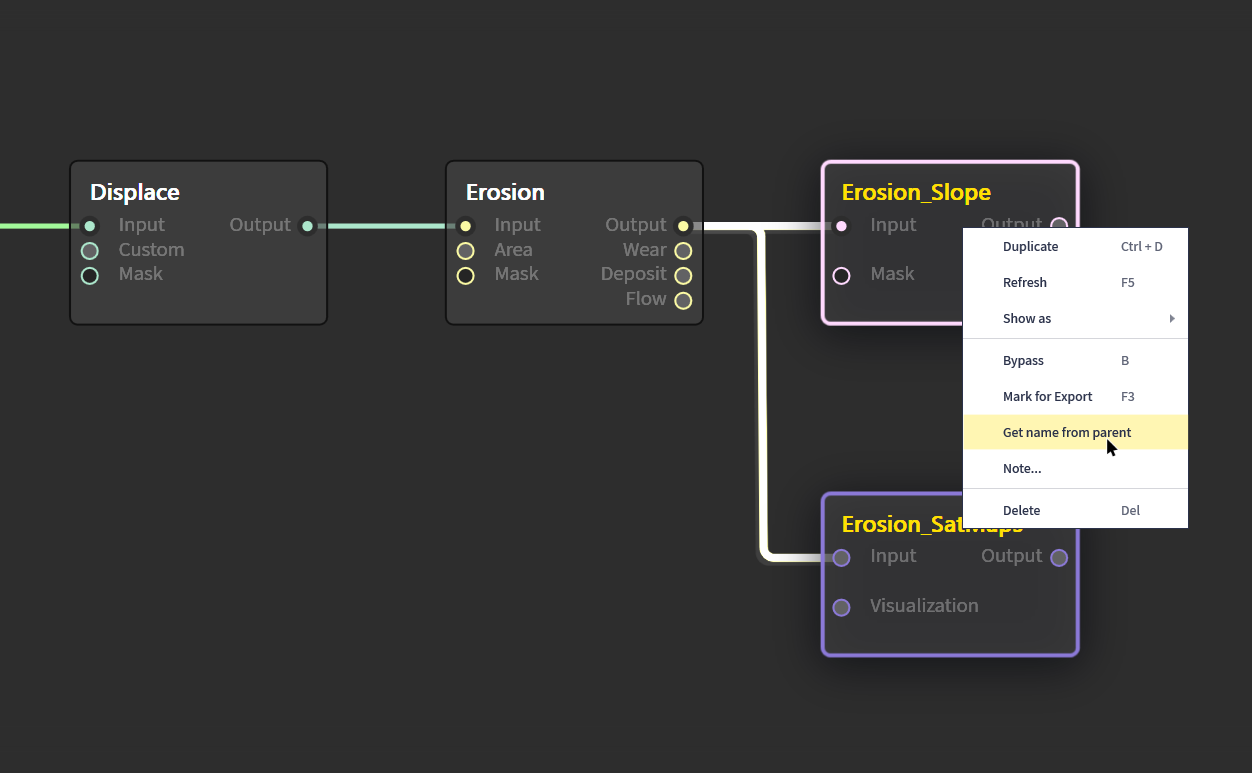 The new 'Get name from parent' command in the node context menu can get the name of the parent and add the node's own name as a suffix. For example, Slope becomes "Erosion_Slope".

You will now be able to right-click any node to copy the settings and paste it on another node of the same class. The options are also available through the node properties menu.

Gaea's diagnostics tool Watson has been updated to work faster and better than ever before. It can collect diagnostics information very quickly and try to pinpoint problems more accurately.

You can now also file a ticket directly straight from Gaea by entering a few details, and optionally attaching the problem .TOR File. This will save you time from having to go file a ticket manually, while still giving us the vital information needed to identify your problem and provide you with a fix.

Filing a ticket is optional. You can choose to save a zip file that you can examine yourself, or file manually at your convenience. As always, our logs and other details are stored in plain text in our ever present efforts for transparency.

Any .tor file shared with us is used only for diagnosing the problem and disposed of immediately afterwards.

Viewport Freezing, and other improvements

We have made some changes in anticipation of the larger changes forthcoming in Gae 1.2. These stability improvements should improve many areas of Gaea, including the occasional viewport freeze some users have encountered.

Please see the full list below for the many other important changes introduced in this build.