This build contains critical fixes for a number of key features. We recommend updating as soon as possible.

Following the less-than-satisfactory results from the previous builds. We have overhauled how we save 32-bit files such as OpenEXR and TIFF.

OpenEXR and TIFF are now joined with .r32 and .pfm formats as well.

To reduce confusion with the "Ignore vertical scaling" option, we are introducing the Output Range option.

You can now choose between Natural Elevation, Artificial Scaling, and Force Full Range.

See the Building Terrains page for a detailed explanation.

The Shaper node can bulk up, or bulk down, a terrain. Shaper is mainly created to add more "body" to landscape before eroding to avoid a 人 look after eroding. Usually, if you erode a Λ shape, you get 人 shape. If you apply Shaper, the pre-erosion shape becomes a ∩ shape, and after eroding it will be Λ, retaining the bulk in higher altitudes.

Shaper can modify the body structure without losing fine details.

We brought the Flux markers from Helios and GeoGlyph into Gaea. When you move the slider, the last 3 positions are marked with little dots in decreasing opacity levels.

These handy little guides can be helpful when exploring settings.

Unlike undo, which needs to be done per setting, the Revert node feature is a time saving facility added to all nodes. Whenever you select a node, the "state" of that node is saved to memory. If you change several settings and decide you want to go back to what you had, you can just go to the Node Properties menu and select "Revert Node". This will revert the node back to the saved state. 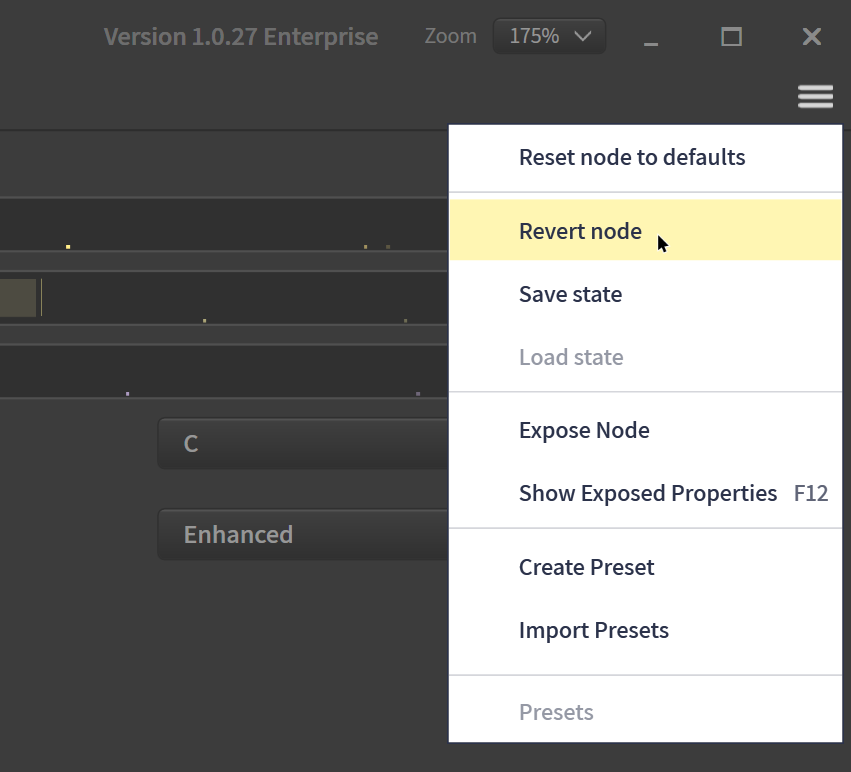 Be careful, when you select another node, the state of the previous node will be forgotten. But if you want to preserve the state for longer periods of time, you can manually select "Save State" in the same menu for any node. Now that node state is saved in memory until you close the file. You can go back and load the saved state anytime.

Gaea is created, in part, on the Microsoft .NET Framework. Previous versions of Gaea have relied on .NET Framework 4.7. With this build, we are now using the latest 4.8 version. This will allow us to deliver better stability and improve Gaea's performance.

In most cases, this won't change anything for you. If you are running Windows 10 you probably already have .NET Framework 4.8 installed. If not, Gaea's installer will install it for you.

If you encounter any issues, please try installing it manually from this direct link.